In this chapter, i’d like to introduce about the most common device used for measuring flow rate – Orifice Plate.

In fluid flow, friction loss (or skin friction) is the loss of pressure or “head” (named HEAD LOSS/ PRESSURE PERMANENT LOSS)that occurs in pipe or duct flow due to the effect of the fluid’s viscosity near the surface of the pipe or duct – This is one of Disadvantage of orifice plate on Piping system.

But the problem is the turbulent of flow near by the orifice will make less accuracy of the Pressure drop sensors, hence we get wrong flow rate calculation.

Several standards exist for pressure tap locations. Ideally, the upstream pressure tap will detect fluid pressure at a point of minimum velocity, and the downstream tap will detect pressure at the “vena contracta” (maximum velocity). In reality, this ideal is never perfectly achieved. An overview of the most popular tap locations for orifice plates is shown in the following illustration: 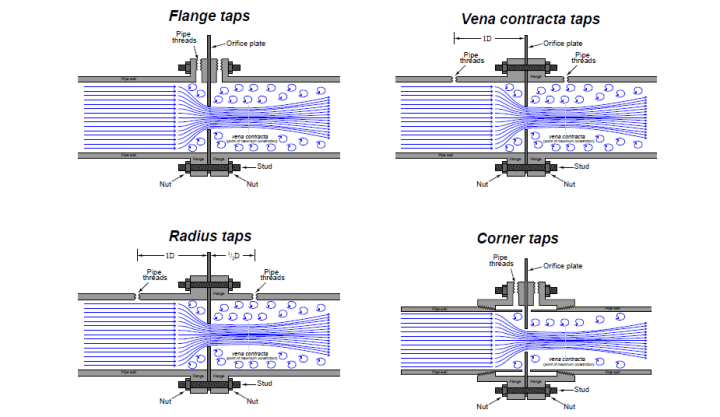 The most common are flange taps for pipe  ( They are located 1 inch from the  upstream face of orifice plate and 1 inch from downstream face.  They are used for all standard orifice configurations.)

VENA-CONTRACTA TAP (Greater than 6″, for plant measurement where the flows are relatively constant and plates are not changed)

(Vena-Contracta Taps are located 1 pipe diameter upstream of orifice plate and at the point of minimum pressure downstream, this point is called the vena-contracta.  This point varies with Beta ratio.)

Corner Taps are used for honed meter runs like an integral orifice.  They are located immediately adjacent to plate faces both upstream and downstream. Corner taps must be used on small pipe diameters where the vena-contracta is so close to the downstream face of the orifice plate that a downstream flange tap would sense pressure in the highly turbulent region (too far downstream). Corner taps obviously require distinctive (i.e. expensive) flange fittings, which is why they tend to be used only when necessary.

PIPE TAP: (used for unstable flow pipeline as the measurement will not be affected by the flow rate and turbulent at downstream)

Note: The Orifice Turndown ratio around 3:1 to 6:1 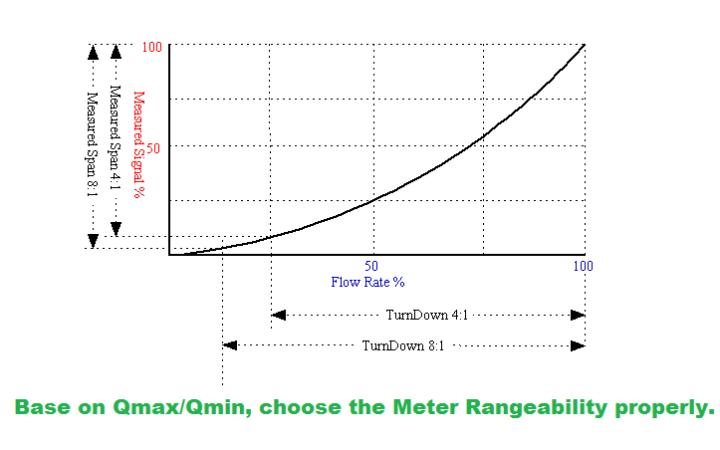 One thought on “FLOW METER AND ORIFICE PLATE”