The impeller of a centrifugal pump is rotated rapidly to impart velocity to a pumped liquid. If you’ve never seen a pump impeller before, visualize a boat propeller. 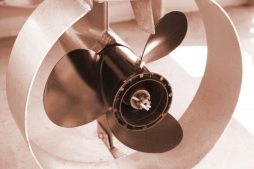 When a boat propeller is rotated it imparts velocity to the liquid around it. As the liquid moves, that velocity forces the propeller to move forward in the water.

Now imagine what would happen if the boat were anchored in place, firmly enough to prevent the boat from moving. Next imagine that the velocity generated by the boat propeller were contained and controlled so that a stream of water was created that you could direct where you pleased.

In a centrifugal pump you have an impeller rotating rapidly and imparting velocity to the liquid in the pump just as a boat propeller imparts velocity to the water in a lake. The casing is the part of the arrangement that takes that velocity, contains it, controls is, and sends it along in a useful direction.

There are many different types of centrifugal pump impellers. The most common types of pump impellers are discussed in the article Fundamental Pump Components: Volutes, Casings, and Impellers.

One thought on “Centrifugal Pump Impellers”

What is a Pelton Wheel Turbine?

What is a Reciprocating Pump?

What are the Best Benefits Of Air Blowers Online?