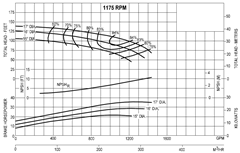 All of the curves in this article were generated by Pump-Flo’s web-based pump selection software.

What is a Pump Curve?

A pump curve is a graphical representation of the performance characteristics of a pump.

For the sake of example, today we’re going to look at a selection made for the following design condition: 1,000 GPM at 100 ft.

Here is one possible pump selection that might be a good fit for that operating condition:

The design-trim impeller is the impeller trim the pump selection software has selected as the closest fit to the design condition provided. In this case, the design-trim is 16.3125”, the max-trim is 17” and the minimum-trim is 15”. We know this by looking at the left-hand side of the curve where these three numbers appear.

Considering the design trim curve we see that at zero flow, also known as shutoff or dead-head, the pump will develop about 130 ft of head. This is the head the pump would develop if it were operating against a closed valve.

Keep in mind that the actual pressure measured between the pump and the closed valve might exceed this value because a pump ADDS head to the liquid being pumped. In other words, if this pump were operating at shutoff with suction pressure of 20 feet the total head experienced at the pump discharge flange would be 150 ft (20 ft + 130 ft).

Considering the design trim impeller, we see that the following things are true:

The maximum (17″) and minimum (15″) trim curves also tell us the possible conditions that the pump could be modified to meet in the future by installing an impeller of a larger or smaller different trim.

In addition to head and flow, most pump performance curves will also provide efficiency information.

The efficiency of a pump is the relationship between the input horsepower required to drive the pump at a given operating condition, and the water horsepower being created by the pump.

Special attention should be paid to the location of BEP relative to the operating condition. Pumps run best at or near BEP. For this reason the Hydraulic Institute (HI) has defined a pumps Preferred Operating Region (POR) as flows from 70% to 120% of flow at BEP for most centrifugal pumps.

It is best to select a pump that will operate most of the time in the POR since this will have implications for pump life and power consumption. For some pumps with high specific speed (Ns) impellers, the POR is smaller – 85% to 110% of BEP. You can read more about specific speed in our article about pump casings and impellers.

There is another region of operation that is defined by the pump manufacturer rather than by a standards organizations such as HI: the Allowable Operating Region (AOR). In our example curve, the AOR is indicated by the portion of the curve shaded in light yellow. This is the region that the pump manufacturer has determined comprises all of the points that this pump can operate at continuously.

The example pump performance curve above has two more items which should be mentioned.

First, the red line on the left hand side of the pump curve is the Minimum Continuous Stable Flow (MCSF) line. This is the point beyond which the pump manufacturer has determined the pump should not be allowed to operate for any extended period of time.

Second, the blue curve beginning at 0 GPM and 0 Ft and extending through the design condition is the System Curve and represents the operation of the system in which the pump is being applied.

System curve information should be provided by the Engineer designing the pump system. In the pump selection software, the system curve can be manipulated by manually entering data points, and is particularly useful when evaluating the variable-speed performance of a pump.

The next part of the pump curve is the Net Positive Suction Head Required (NPSHr) curve. The NPSHr curve provides information about the suction characteristics of the pump at different flows. The x-axis is still measured in flow units, but the y-axis is now measured in feet of NPSHr. Each point along the curve identifies the NPSHr required by the pump at that flow to avoid cavitation issues that would be damaging to the pump and would have a negative impact on overall pump performance.

Looking back at our example design flow of 1,000 GPM we can see that this pump will require approximately 7 ft of NPSHr at that condition. A typical safety margin between Net Positive Suction Head Available (NPSHa) and required (NPSHr) is 5 ft. So in this case it would generally be recommended that this pump not be applied in applications where NPSHa at the design flow of 1,000 GPM is less than approximately 12 ft.

Generally speaking NPSHr does not vary dramatically between variations in impeller trim which is why we do not see separate curves for the minimum and maximum impeller trims. Those curves are actually present, but they are overlaid by the design-trim NPSHr curve.

The final portion of the pump curve is the power curve. Once again the x-axis is measured in units of flow, but the y-axis is now measured in power units. In this case the unit of measurement is horsepower, but in the case of an application measured in metric units, power is typically measured in kilowatts. This curve tells us how much power the pump will demand at any particular flow point. This information is useful in ensuring the selected motor is suitably sized, and is also useful when calculating power consumption costs.

When combined, these three curves are called the composite pump curve, and they provide the information we need to determine if a particular pump is a suitable selection for the hydraulic requirements of an application. Understanding the information communicated by each part of the curve is critical to ensuring that the pump selected is a good fit for the application’s hydraulics.

One thought on “Pump Curve Understanding”