Vortex, or vortex in Vessels, is the rotation of a liquid’s core while releasing or transferring liquid from Vessels. This appears to be caused by the Earth’s rotation. Vortex can be easily observed. In everyday life, such as flushing the toilet Releasing water from the sink or bathtub

Vortex in Vessels will take gas or vapor into the liquid stream that is transferred out. This will make the refining process less efficient, the system has more pressure drop, causing Erosion from the two-phase flow at the nozzle or pipe connecting to the vessel and causing cavitation at the downstream pump as well. These reasons in Vessels require a Vortex Breaker.

Vortex Breaker is a device ( the Device)  is used to inhibit the occurrence or the formation of a vortex ( Vortex A) as a transfer fluid from the  Vessel by Vortex A the Breaker will be installed inside the Vessel at the entrance. Of Bottom outlet nozzle and Bottom drain nozzle. There are many types of Vortex Breaker in Vessels. Commonly found are Cross-Type, Disc Type, and Cross & Disc Type.

To prevent the occurrence of vortex Vortex, there’s the Breakers with Cross-Type and Disc Type A principle.

1. Cross-Type Vortex BreakeruseBaffle Plates placed across the rotation of the vortex ( Vortex) makes Vortex can not be formed.

2. The Disc Type  Vortex Breaker uses a disc plate placed on the top of the bottom outlet nozzle to control the flow of liquid to the nozzle from the side. Thus preventing the formation of Vortex. 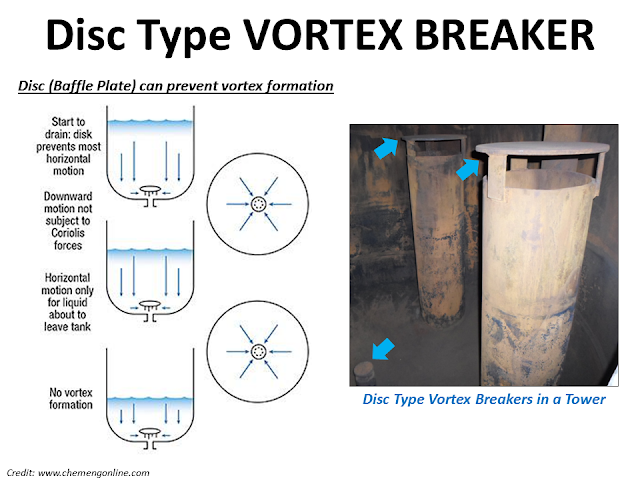 Disc and Cross-Type Vortex Breaker is another form that is common in Vessels using this format to have either Disc plate and Cross baffle plate in order to prevent and inhibit the formation of a vortex (Vortex).

Improper Vortex Breaker model May be able to inhibit the formation of a vortex (Vortex) was the Case examples below Vortex can be formed. This will result in vapor coming into the liquid stream and causing Erosion from the two-phase flow at the bottom outlet nozzle and the pipe connected to the Deaerator, as well as damage the Vortex breaker baffle plate by itself.