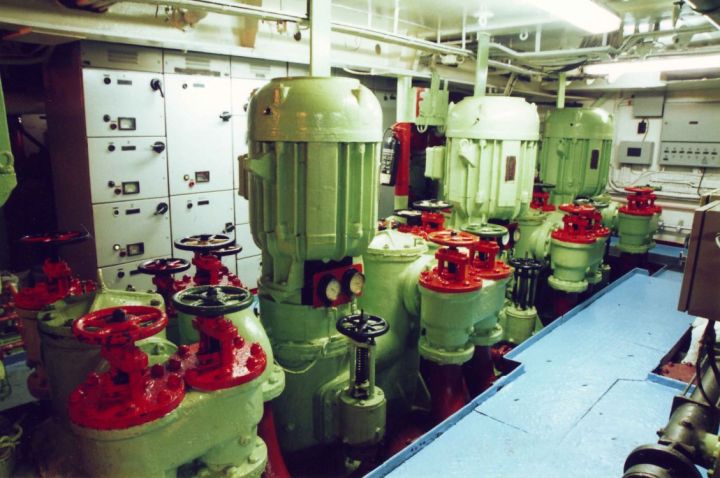 Position the pump in an accessible location. When laying out the system, give some consideration to the people who eventually will have to look after the pump that easy access and working room for routine maintenance. Also, make sure overhead space is adequate for lifting devices and working clearance.

Make the pipe diameter on both the inlet and the outlet sides of the pump at least one size larger than the nozzle itself. On the horizontal inlet side, an eccentric reducer is required to decrease the size of the pipe from the suction line to the inlet nozzle. Positioning the reducer with the flat side on top, as shown, eliminates the potential problem of air pockets at a high point in the suction line.

A concentric increaser should be bolted directly to the vertical discharge flange prior to the location of any valves. This increaser will slow down the velocity of the liquid leaving the pump to an acceptable rate within the system itself and, in particular, through the check valve and isolating valve. Keeping the velocity low (usually less than 10 ft/sec) reduces friction losses in the line and power draw at the pump.

Eliminate elbows mounted on the inlet nozzle of the pump. Much discussion has taken place about the acceptable configuration of an elbow on the suction flange of a pump. Let’s simplify it: There isn’t one!

There always is an uneven flow in an elbow. Installing an elbow on the suction of any pump introduces that uneven flow into the eye of the impeller. This can create turbulence and air entrainment, which can result in impeller damage, vibration and premature pump failure.

The problem is compounded when the elbow is installed in a horizontal plane on the inlet double suction pump, as shown. This configuration introduces uneven flows into the opposing eyes of the impeller, essentially destroying the hydraulic balance of the rotating element.

Under these conditions, the overloaded bearing will fail prematurely and regularly if the pump is packed. However, if the pump is fitted with a mechanical seal, the seal usually will fail instead of the bearing  but just as regularly and, often, more frequently. When it is absolutely essential to position an elbow on the inlet of a double suction pump, it must be located at right angles to the shaft.

The only thing worse than one elbow on the suction of a pump is two elbows on the suction — particularly if they are positioned close together in planes at right angles to each other. This creates a spinning effect in the liquid that is carried into the impeller and causes turbulence, inefficiency and vibration.

Provide the suction side with a straight run of pipe, in a length equivalent to 5 to 10 times the diameter of that pipe, between the suction reducer and the first obstruction in the line. For reliable pump operation, liquid must arrive at the impeller eye with the right pressure and smooth uniform flow. Achieving this depends a great deal upon the suction piping design.

Positive Displacement (PD) pumps – “which are what gear pumps are, should not be deadheaded, as they will break immediately” should always be installed with a Relief Valve in the discharge line, to protect the pump and piping against any type of line blockage, including the inadvertent closing of an isolation valve.

 What Is Defence Engineering and How Is It Different?