It’s well known that the SUS materials (piping) very often demand a final step of surface treatment, i.e. passivation, in order to achieve a product with acceptable visual appearance and high corrosion resistance. The passivation process removes chips and “free iron” contaminations left behind on the surface from different fabrication operations. These contaminants are potential corrosion sites that may result in premature corrosion and ultimately in deterioration of the component if not removed.

There many argument and penalty during chemical tanker building with those relating to Painting schedule and Passivation quality. All the jobs are conflicted and much delayed on whole project by just its schedule closing to launching day.

With the passivation, the meaning of ” Iron free” is the key of inspection. Following the specified procedure, the PH content testing/ the Copper sulfate testing are randomly verified as per inspector satisfactory. It’s unnecessary, however, an experiment been carriedout and prove that the mean of Passivation is preferably called  as ” Cleaning “.

In order to prove the durability of the passivation treatments – 5 methods , i.e. if the passivation effect last even after some time in service, the passivated specimens were immersed in 0.5 weight-% sulphuric acid for 3 days. Dilute sulphuric acid was chosen as it is a fair common environment for stainless steels and also an environment where the investigated grade is resistant, i.e. showing a passive behaviour. During the 3 days, the open circuit potential was recorded. After that exposure the CPT – Critical pitting temperatures measurements and the surface analysis were repeated.

Conclusions
• The passive film adjusts itself after the environment and reaches an equilibrium state with optimum properties after approximately one day. 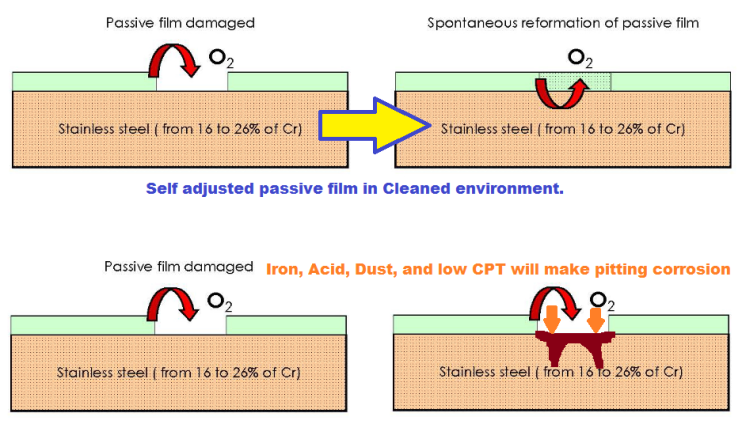 • Passivation with nitric acid decreases the time to equilibrium and the positive effect
is obtained faster than for the other treatments. (Advantage in Dusty environment workshop)
• Duration studies show that all treatments have the same effect, after maximum 3 days, when regarding corrosion resistance.
• Chemical passivation treatments are not essential as the passive film forms spontaneously – tự phát sinh in the presence of oxygen. When applied to stainless steels, the main function of a chemical passivation treatment is to clean the surface, by removing free iron and other surface contaminants. (See the CPT analysis, in such dusty environment, the CPT is around 30 deg with the HNO3 treatment but 22 deg with “Freshed cleanning”, however, after 3 days exposure showing the same CPT between two treatments. )

As now we can say that the Passivation should preferably be called as Free-iron-Cleaning.

In the other hand, The Free-iron-Cleaning have to be carried out in Cleaned environment ( No dust, No Iron chips flying around ) and let it adjusts passive film itself in Cleaned condition around 1 – 2 days. Hence the inspector can come to conform with no pitting and color changing condition at that time is the ideal inspection concept.

One thought on “Passivation of Stainless steel”