Water hammer is a pressure surge or wave resulting when a fluid in motion is forced to stop or change the velocity.

A water hammer commonly occurs when a valve closes suddenly at an end of a pipeline system, and a pressure wave propagates in the pipe. It is also called hydraulic shock.

A signifcant, nearly instantaneous pressure shock wave may be generated when a valve opens or closes too quickly, or when a pump starts with an empty discharge line or suddenly shuts down. This phenomenon is the result of the sudden change in velocity of the ﬂuid ﬂow in combination with the characteristics of the piping. This shock wave is manifested by a series of hammerblow-like sounds, called water hammer, which may have suffcient magnitude to cause catastrophic failure within the piping system.

2. When does water hammer occur & Cause?

– Water hammer commonly occurs when a valve is closed suddenly at an end of a pipeline system, power failure, main breaks, pump start-up and shut-down operations, check-valve slam, rapid demand variation, opening and closing of fire hydrants and a pressure wave propagates in the pipe etc.

– If the pipe is suddenly closed or opened at the outlet (downstream), the mass of water before the closure is still moving forward with some velocity, building up a high pressure and shock waves and hammering noise. Water hammer can cause pipelines to break if the pressure is high enough. –> to prevent this, Air traps or stand pipes (open at the top) are sometimes added as dampers to water systems to provide a cushion to absorb the force of moving water in order to prevent damage to the system. (At some hydroelectric generating stations what appears to be a water tower is actually one of these devices, known as a surge drum). 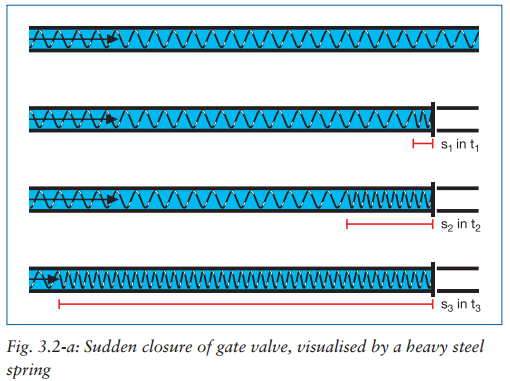 – On the other hand, when a valve in a pipe is closed, the water downstream of the valve will attempt to continue flowing, creating a vacuum that may cause the pipe to collapse or implode. This problem can be particularly acute if the pipe is on a downhill slope. –> To prevent this, air and vacuum relief valves, or air vents, are installed just downstream of the valve to allow air to enter the line and prevent this vacuum from occurring.

– Sudden opening or closing of valves in a pipeline. 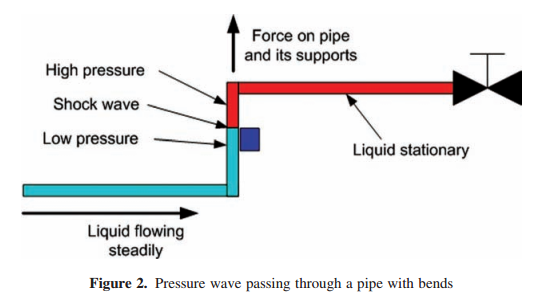 – Starting or stopping the pumps in a pumping system.

– Operating errors or malfunctioning of equipment. Electricity shut off. 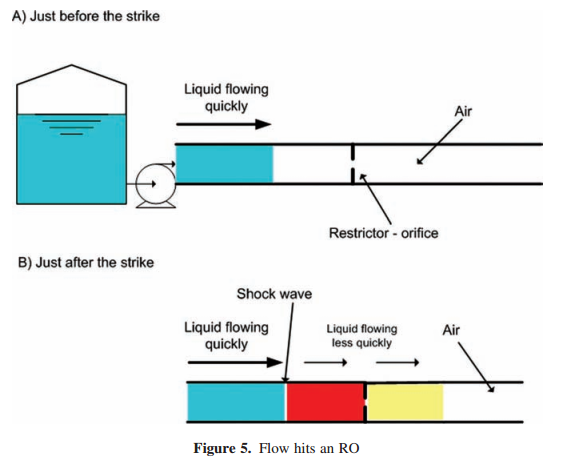 – Improper operation of surge protection devices can do more harm than good. An example is oversizing the surge relief valve or improperly selecting the vacuum breaker-air relief valve. 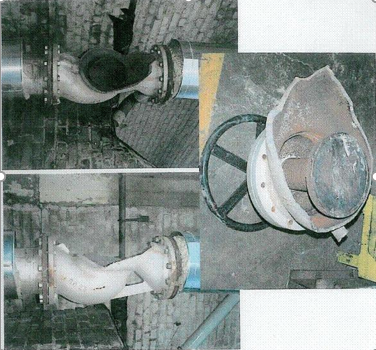 b) Install pressure relief valves to dampen the effects of water hammer and relieve excess pressure and ﬂow.

c) Slow-closing actuated valves should be installed to control the speed at which valves open and close. They can be controlled electrically or pneumatically, eliminating the chances of human error.

GOOD VALVE PERFORMANCE:
Slow operation: Slowing down valve operation by increasing their stroke time is a good way to prevent water hammer. The only accurate way to calculate the minimum stroke time is by making a transient model of the system, including the correct valve characteristics (Cv against angle of closure) and then model different stroke times until a limit is found. Actuators can be slowed down to achieve the safe closure time calculated. Hand valves can be fitted with gearboxes so that it is not possible for an operator to close them suddenly. This should always be done in vulnerable situations rather than rely on “good operating practice”.
Good characteristics: Valves can be made with a number of different characteristic curves. Many valves have poor curves from a surge point of view, and they slow the liquid little during the major part of their travel, but then cause a rapid change in flow as they approach closure, e.g. the “rapid opening” type. Surge protection requires smooth changes in velocity, and so such valves are not welcome in systems susceptible to surge problems. The ideal curve of Cv against valve position depends on the proportion of the pressure drop that occurs across the valve when the flow is normal. This is shown in Figure 6. For a typical design, where the valve pressure drop is about 10% to 20% of the total frictional pressure drop, a curved characteristic (the lower curve) gives the desired flow vs valve position pattern. The valve trim known as the “equal percentage” type matches this best. This therefore gives a fairly linear decrease in flowrate as the valve closes, and so the slowing of the liquid is shared more evenly across the valve stroke. This is ideal for surge prevention, and the valve stroke time can be minimized by using such a valve characteristic.

PUMP INERTIA
Sudden shutdown of a pump, due to a failure of the pump or a failure of the electricity supply, is not possible to prevent absolutely. Depending on the consequences of a trip, it might be desirable to increase the inertia of the pump so that its rate of slowdown is reduced. This can sometimes be done by fitting an over-sized motor, but if this in not possible it is necessary to fit a flywheel between the motor and the pump. This might seem to be an unusual arrangement, but it has been used on many occasions.

COMPRESSIBLE MATERIAL IN THE PIPE
A further way to prevent water hammer is to increase the compressibility of the liquid by injecting a gas into the flow. Gas bubbles effectively increase the compressibility, hence decrease the wave velocity, and decrease the size of any surge problems. The wave
celeric can be reduced by as much as 90% by adding as little as 1% by volume of air in a pipe. However, it may be costly to arrange reliably, and is not a usual solution. It should be remembered that whenever the wave velocity is decreased, the benefit of the reduced Joukowski head (equation 1) has to be offset against the reduced pipe length that is allowable without incurring surge problems (re-arrange equation 2). 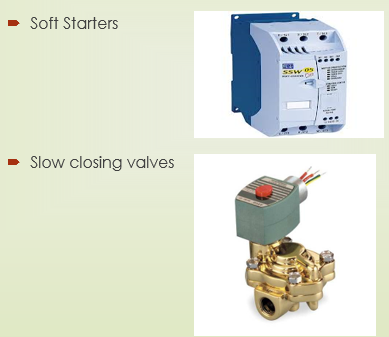 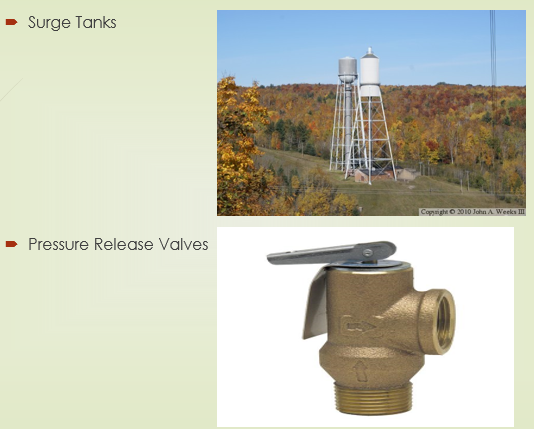 See next part to know more about:

5.  HOW CAN THE CONSEQUENCES OF WATER HAMMER BE AVOIDED?

6.  HOW TO ANALYSE A PIPING SYSTEM FOR RISK OF WATER HAMMER?