The potential area for Corrosion Under Insulation (CUI) is the area where water can be trapped in the insulation or fireproofing. For the vertical vessel, there is a risk point as in the picture. 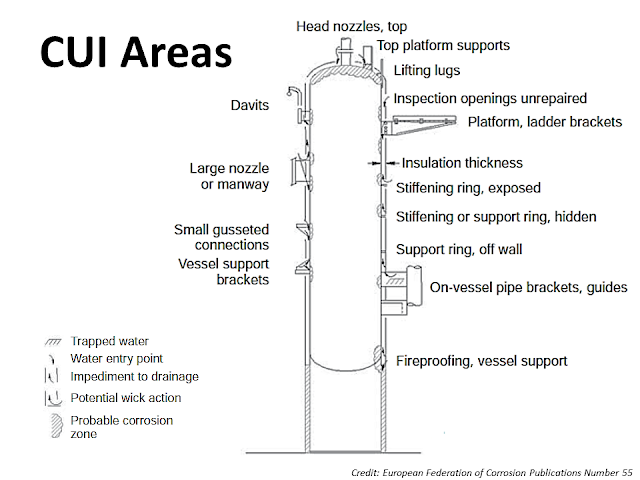 Critical Factors
a) It affects externally insulated piping and equipment and those that are in intermittent service or operate between:
1) 10°F (–12°C) and 350°F (175°C) for carbon and low alloy steels,
2) 140ºF (60°C) and 400ºF (205°C) for austenitic stainless steels and duplex stainless steels b) Corrosion rates increase with increasing metal temperature up to the point where the water
evaporates quickly. For insulated components, corrosion becomes more severe at metal temperatures between the boiling point 212°F (100°C) and 350°F (121°C), where water is less likely
to vaporize and insulation stays wet longer.
c) The design of the insulation system, insulation type, temperature, and environment are critical factors.
d) Poor design and/or installations that allow water to become trapped will increase CUI.
e) Insulating materials that hold moisture (wick) can be more of a problem.
f) Cyclic thermal operation or intermittent service can increase corrosion.
g) Equipment that operates below the water dewpoint tends to condense water on the metal surface
thus providing a wet environment and increasing the risk of corrosion.
h) Damage is aggravated by contaminants that may be leached out of the insulation, such as chlorides.
i) Plants located in areas with high annual rainfall or warmer, marine locations are more prone to CUI than plants located in cooler, drier, mid-continent locations.
j) Environments that provide airborne contaminants such as chlorides (marine environments, cooling tower drift) or SO2 (stack emissions) can accelerate corrosion. 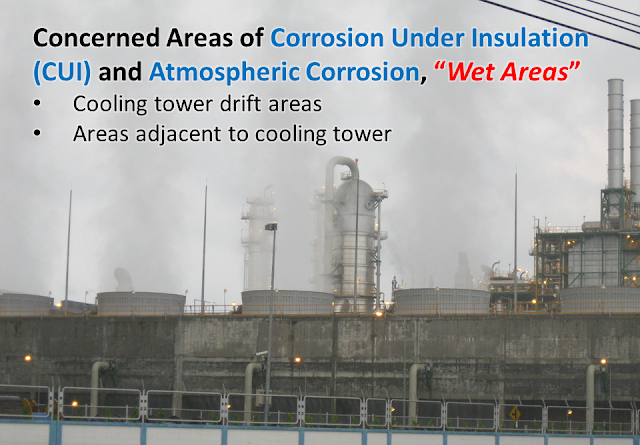 According to API RP 583, Carbon steel piping with temperatures above 175 C will not cause Corrosion Under Insulation (CUI) for the Tower with Operating Temperature higher than 175 C, but there are pipes connecting from the Tower to the Instrument that has a  Deadleg, the temperature will drop lower due to lack of Flow and heat loss indefinitely Therefore, there is a chance that CUI will exist. 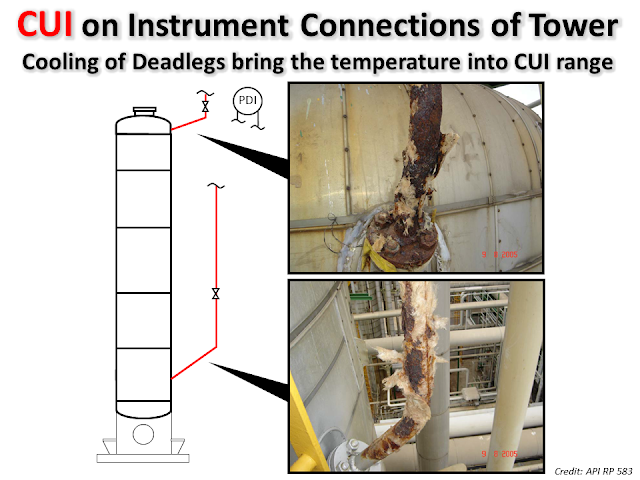 Continuous with the CUI in the Shutdown Inspection & Maintenance of the Column or Tower covered with Cold Insulation:

1) Even if it is equipped with Cold Insulation, CUI will occur if the operating temperature range CUI Range (the 12  C to 175 C for Carbon steel according to API RP 583).

2) Temperature (Metal Temperature) affects directly the severity of the CUI. The temperature between 77 – 110 C will cause the most severe CUI and the intensity will decrease when the temperature is lower, which can be seen and compare that the bottom versus the top of the Tower. 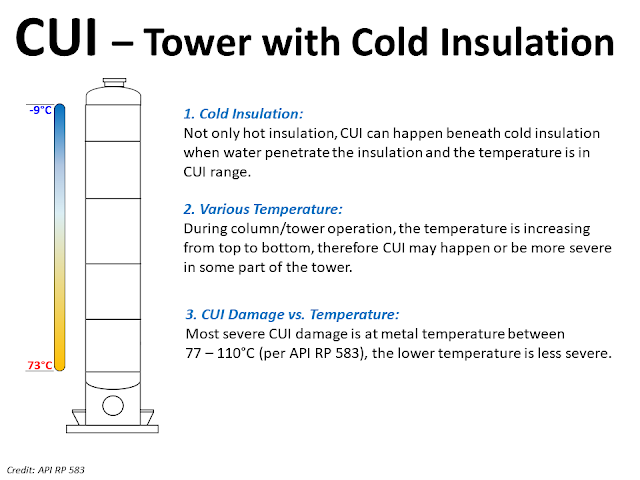 What is Cooling tower in refinery plant

What is a Pelton Wheel Turbine?

What is a Reciprocating Pump?

What are the Best Benefits Of Air Blowers Online?