Likely Location of CUI for Piping – Penetration or Breach in the jacket (Vents);

Design of Termination of Insulation for CUI Protection (Piping); 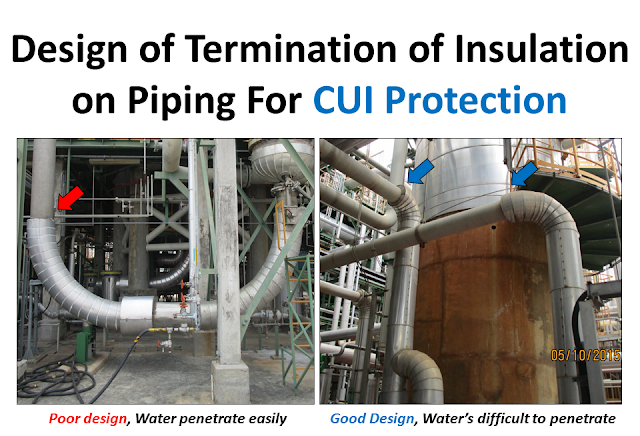 For Carbon Steel Piping with temperatures in the range of Corrosion Under Insulation (CUI), -10 º C to 175 º C (water vaporized point) and will have strong aggregate in the range of 77 ºC – 110 ºC, Pipe Supports is one of the points that has The chances of getting a CUI are higher and more severe than other areas. Since it is the area where water will accumulate and the air can easily penetrate. So don’t forget to choose Pipe Supports for CUI checking . 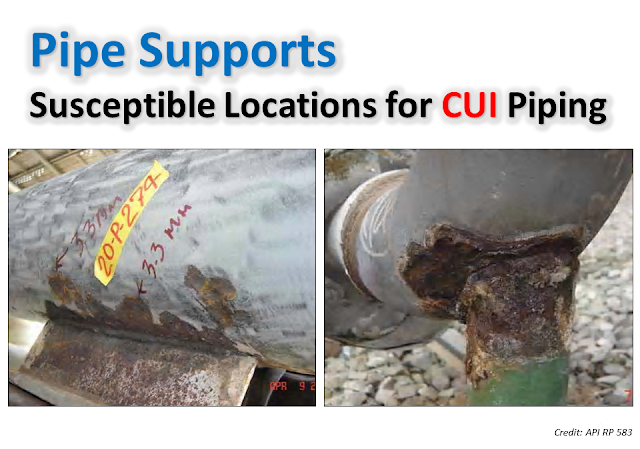 Jacket grounds Tee of condensate piping bad because water can easily penetrate the joints and cause pipe damage by CUI so if the design of Insulation Jacket is sure to dismantle Insulation examination CUI well too. 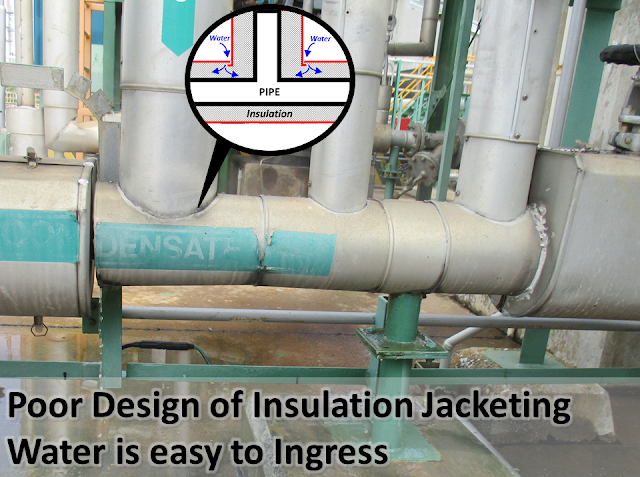 Likely Location of CUI for Piping – Termination of insulation in vertical pipe: 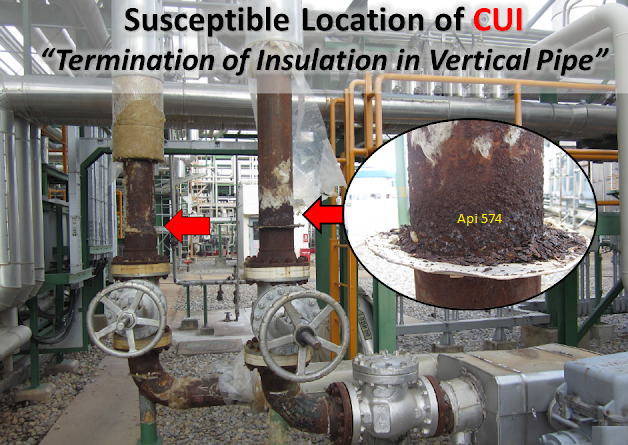 CUI on Deadlegs in Cold Piping ;
In the picture, we can see that the main pipe from the pump has thick ice, but the branch of the pipe to the pressure gauge has no ice at all. And can also see that a Corrosion Under Insulation or CUI occurs at the branch pipe at a distance from the main line

Tube sets used at temperatures below -12*C , which according to API RP 574 , said pipe Carbon steel and the Low-alloy Steel at a minimum temperature of – 12*C will not cause CUI but the pipes Branch to Pressure gauge. Deadlegs are characterized as having no fluid flow . As a result, the heat from the outside of the pipe can cause the pipe to rise in temperature and cause CUI (no ice shows that the temperature is greater than 0*C.)
When planning a CUI audit, don’t forget to think of Deadlegs too.

According to API RP 574, Carbon steel piping with temperatures above 175 C will not cause Corrosion Under Insulation (CUI). However, pipes connecting the Main Line to the Instrument with Deadleg Instrument will have lower temperatures due to lack of Flow. Therefore, there is a chance that the CUI will occur.

Other Corrosion Under Insulation (CUI);
1) CUI can occur if the operating temperature is within the CUI range (-12 C to 175 C for Carbon Steel Piping according to API 570) even if the temperature changes outside the CUI range during use (Cyclic temperature service)
2) The CUI is the point where water and air can enter the insulation , which is the connection point of the instrument that extends from the insulation at the top of the pipe.
3) Dissimilar material jointing the pipe Carbon steel with Instrument is Stainless make the joints of the pipes are Carbon Steel make Corrosion more serious. Due to the effect of Galvanic corrosion.

One thought on “Typical location of CUI corrosion in piping system”

What is Chill Plate in Welding