Likely Location of CUI for Vessels – Bottom of Horizontal Vessel;

Likely Location of CUI on Tank – Tank Lower Shell;
Area of Tank Shell adjacent to the Tank Bottom As Potentially Corrosion Under Insulation (CUI) serious because it is an area where water can accumulate and be trapped. It is also the area Insulation may be exposed to direct water Foundation them.
In the API RP 575 Storage Tank Inspection Practice, it is recommended that the Operating Temperature of the most severe CUI is between 43 – 93 C. Therefore, the tank that is used in the above temperature range should first be examined. 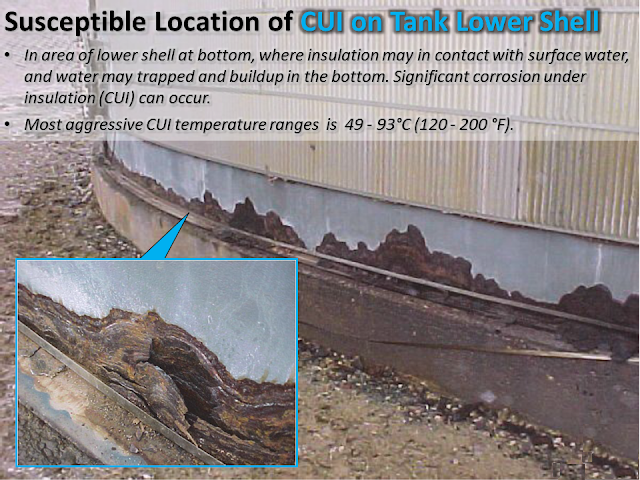 Design of Insulated Tank Shell and Skirt for Minimize CUI “Gap at the Bottom”;
This can be done by leaving a gap or “Gap” between the Insulation and the Bottomto prevent water to accumulate and accumulate in the said area, causing severe Corrosion . Prevent insulation from going Water occupies Bottom ‘s a look at a sample below: 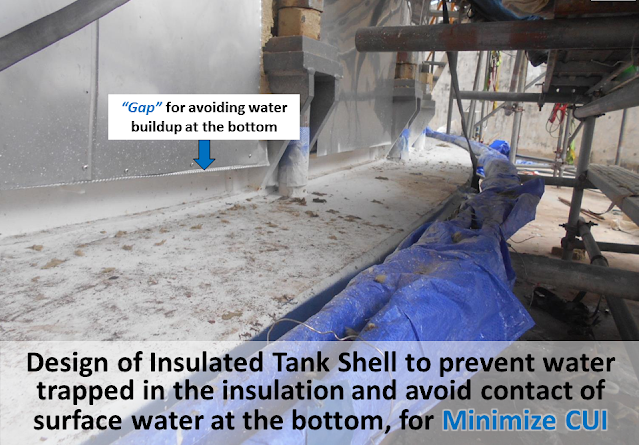 From many examples of Case CUI, we find that the basic principles in specifying the location of the CUI.  Let us imagine that where can the water enter? If water enters the insulation , where will it be? And where can the weather go through? At that point there is a chance of a severe CUI .