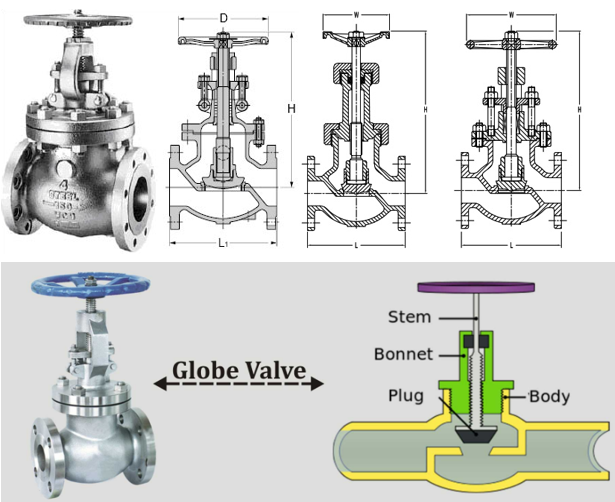 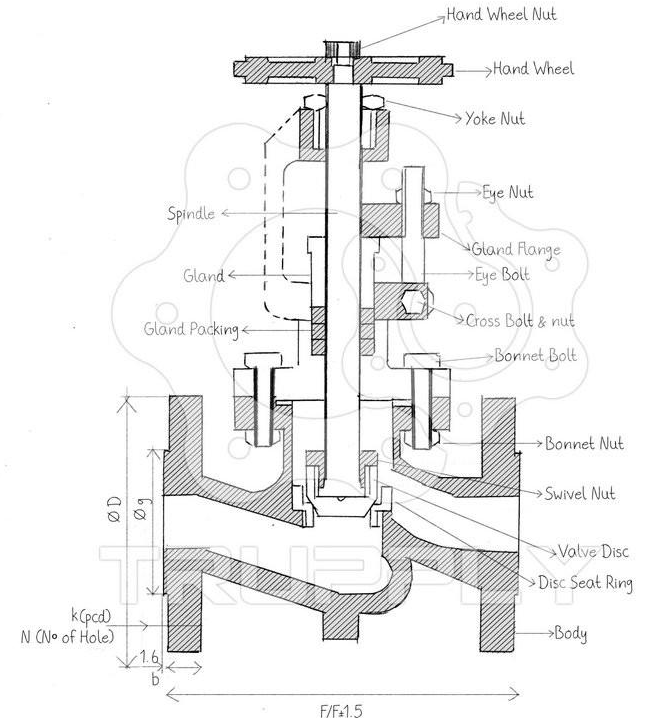 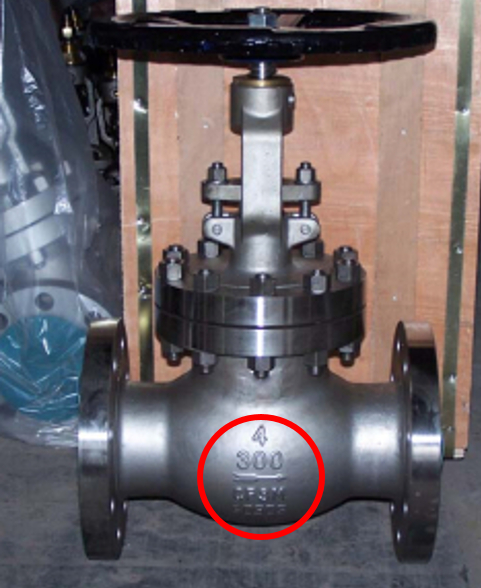 Globe valves  can be arranged so that the disk closes  against or in the same direction of fluid flow.  When the disk closes against the direction of flow, the kinetic energy of the fluid impedes closing but aids opening of the valve.   When the disk closes in the same direction of flow, the kinetic energy of the fluid aids closing but impedes opening.   This characteristic is preferableto other designs when quick-acting stop valves are necessary. Globe valves also have drawbacks.   The most evident shortcoming of the simple globe valve isthe  high  head  loss  from  two  or  more  right  angle  turns  of flowing  fluid.    Obstructions  and discontinuities in the flowpath lead to head loss.  In a large high pressure line, the fluid dynamic effects  from  pulsations,  impacts,  and pressure  drops  can  damage  trim,  stem  packing,  andactuators.  In addition, large valve sizes require considerable power to operate and are especially noisy in high pressure applications. Other drawbacks  of globe  valves  are the  large openings necessary  for  disk assembly,  heavier weight than other valves of the same flow rating, and the cantilevered mounting of the disk to the stem.

Due to the angles in the globe valve body there is a high level of head loss. Head loss is the measure of reduction in the total head of liquid as it moves through the system. Total head loss can be calculated by summing the elevation head, velocity head and pressure head. While head loss is unavoidable in fluid systems, it is increased by obstructions and discontinuities in the flow path such as the S shape of the globe valve design. The body and flow pipes are rounded and smooth to provide system flow without creating turbulence or noise. To avoid creating additional pressure losses at high velocity the pipes should be a constant area. Globe valves are available in three main body types (although custom designs are available as well): angle design, Y-shaped, and Z- shaped.

The simplest design and most common for water applications is the Z-body.  The Z-bodyis illustrated  in  Figure  9. For  this  body  design,  the  Z-shaped  diaphragm  or partitionacross the globular body contains the seat.   The horizontal setting of the seat allows thestem  and  disk to  travel  at  right  angles  to  the  pipe  axis.   The  stem  passes through  thebonnet which is attached to a large opening at the top of the valve body. This providesa symmetrical form that simplifies manufacture, installation, and repair. As shown  in  Figure  9,  the  globe valve disk can   be   totally   removed   from   the flowpath or  it  can  completely  close the flowpath. The essential principle of globe valve operation is the perpendicular movement of the disk away from the seat. This causes the annular space between the disk and seat ring to gradually close as the valve  is  closed.   This characteristic  gives the   globe   valve   good   throttling   ability, which  permits  its  use in regulating  flow. Therefore,  the  globe  valve  may  be  used for  both  stopping  and starting  fluid  flowand for regulating flow. When  compared  to  a  gate  valve,  a globe valve   generally   yields   much   less   seat leakage.   This  is  because  the  disk-to-seatring contact is more at right angles, which permits the force of closing to tightly seat the disk. 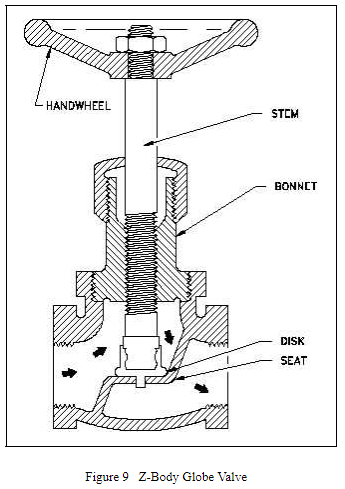 Figure  10  illustrates  a  typical Y-body   globe   valve. This design is a remedy for the high pressure drop inherent in globe valves. The seat and stem areangled at approximately 45. The  angle  yields  a  straighter flowpath (at full opening) and provides the stem, bonnet, and packing  a  relatively  pressure-resistant envelope. Y-body  globe valves  are  best suited  for  high  pressure  and other severe services.  In small sizes for intermittent  flows, the pressure loss may not be as important as the other considerations favoring the Y-body   design. Hence, the flow passage of small Y-body globe valves is not as carefully streamlined  as  that  for  larger valves. 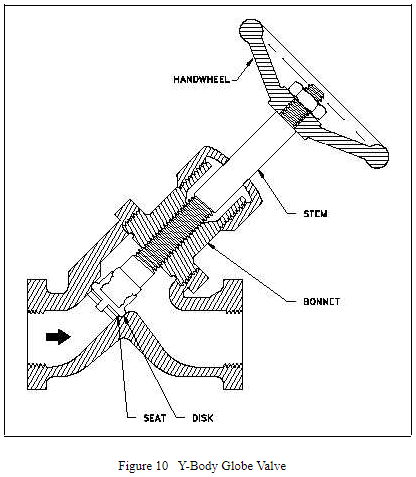 The angle body globe valve design, illustrated in Figure 11, is a simple modification of the basic   globe   valve. Having   ends   at   right angles,  the  diaphragm  can  be  a simple flat plate.  Fluid is able to flow through with onlya  single  90  turn  and  discharge downward more  symmetrically than  the discharge  from an ordinary globe. A particular advantage ofthe angle body design is  that it can functionas both a valve and a piping elbow. For     moderate conditions of     pressure,temperature, and flow, the angle valve closely resembles   the  ordinary   globe. The  anglevalve’s   discharge   conditions are   favorable with respect to fluid dynamics and erosion. 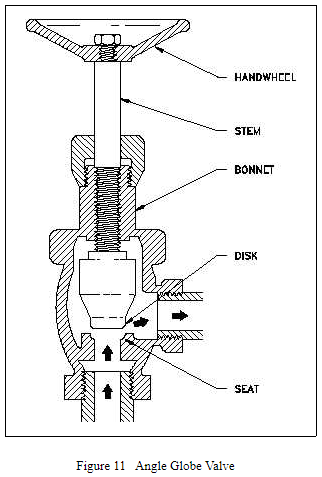 -For low temperature applications, globe and angle valves are ordinarily installed so that pressureis  under  the  disk. This  promotes  easy  operation,  helps  protect the  packing, and eliminates acertain amount of erosive action to the seat and disk faces.

-For high temperature steam service, globe valves are installed so that pressure is above the disk. Otherwise, the stem will contract upon cooling and tend to lift the disk off the seat ( and leaking ).